THE STRONGEST IN ICELAND 2019. 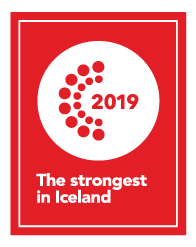 Sláturfélag Suðurlands svf. has been recognised as one of Iceland’s strongest companies in 2019.

Only 2% of Icelandic companies meet these requirements.

Companies that meet the following requirements are eligible for the Strongest in Iceland 2019:

SS is a producers co-operative owned by farmers in the Southern and West part of Iceland and shareholders. The company was founded in 1907.
Our objective is to operate on the wholesale level selling our own production and imported food products and food related products.  The company is operating in three divisions : abattoir, meat processing and imports.

Abattoir
SS runs the largest abattoir in Iceland with about 19% of the animals slaughtered.  The company operates a slaughter plant in Southern part of Iceland. The plant is at Selfoss 50 km East of Reykjavik and has export licence for Japan, US and EU countries. Total volume slaughtered annually is about 4000 ton´s.

Meat processing
SS meat processing division holds a dominant position in meat processed products with market share from 20% to 80% depending on product categories.  Our product range in meat processed products consists of about 150 various products.  SS best selling product is the very famous SS vinarpylsa (hot dog) with about 80% market share.  In fast developing fields like ready made meals SS is a market leader with the 1944 brand.  SS applies a multiple brand strategy in selling its products.
Main processing plant is at Hvolsvollur 115 km East of Reykjavik and is about 9000 m2 in size.

Imports
SS has placed high emphasis on increasing the turnover of the import division where SS represents many outstanding companies.  SS policy is to represent one of three leading brands in every product category.  SS is sole agent and distributor for well-known brands such as Pedigree and Whiskas petfood, McCormick spices, Uncle Ben’s rice and sauces, Mars confectionery and Mars ice-cream, Barilla pasta products and sauces, Bennett Opie´s cocktail cherries and olives, Yara fertilizer and DLG animal feed.

Exports
Iceland has two types of meat that are popular in some world markets.  Icelandic lamb is known for its unique wild flavour and tenderness. In total about 3000 tons are exported annually by all abattoirs in Iceland. SS exports both fresh and frozen lamb in various cuts. The slaughter season for lamb is September and October each year. Horsemeat both fresh and frozen is also exported to selected markets.
SS also exports salted lamb skins and salted hides. Icelandic lamb skins are known for their lightness and have been popular for fashion clothes and nappa production.

This is an necessary category.

This is an non-necessary category.